Vaastu Shastra was first spoken about in Stapatya Veda, which in turn is a constituent of the Atharva Veda, one of the four esteemed Vedas of India. It affirms that because of Vaastu Shastra, the entire universe enjoys the bliss conferred by God. This ancient science channels all the positive energies of the universe to do good to the entire human race. Vaastu is not at all about unworldly remedies, but all about the physical, psychological, and spiritual arrangement of the built environment, and its compatibility with the cosmic energies. This science encompasses the standards according to which the architecture should be laid down, thereby ensuring the dwelling and the area
of occupation to generate overall happiness, healthiness, tranquility, and affluences. 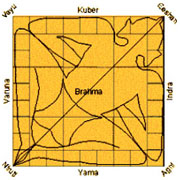 These shlokas in Sanskrit mean that it is due to the science of art and sculpture, Vaastu, the positive cosmic energies prevailing in the universe, confer health, delight, harmony, prosperity, and success upon the human beings. All those who respect the laws of Vaastu Shastra and abide by them, acquire not only the materialistic comforts, but experience the heavenly bliss as well.

The Shastra also believes that the earth or the soil is a living organism, which begets all the other living organisms and organic forms. The human beings do not inhabit this earth alone; they dwell in the space or Aakaasham as well. This further implies that the human beings are thus bond with their individual energies to the forms of energy. They are a part of the cycle of life of death, which is known as ‘Kaala Chakra’. The cosmic energies in accordance with the Panchmahabhutas, the nine planets, the Sun, the Moon, and the Earth, act either in favour or against each other, and generate harmony and disharmony, respectively. This signifies they immensely influence our dwellings. Vaastu Shastra claims that our places of work and residence should therefore be designed in such a manner that the positive energies supersede the negative energies. Consequently, all round happiness and prosperity would dwell with us. But in case the negative energies are dominant over the positive energies, there would be in and out disharmony, disappointment, ill health and distress that would prevail.